On Wednesday 26th June, we welcomed 30 students from six local schools to test their detective skills and investigate the recent ‘crime’ that had taken place on the grounds of the college.

Initial investigation: Students began the day examining the initial crime scene. They looked for clues at the scene of the crime that would lead them to discover the identity of the perpetrator, they then took part in an escape room and worked together to solve a range of hidden clues, problems and tasks. Using our modern science laboratory students utilised current DNA testing equipment to gain information from a DNA sample left at the crime scene. Finally, students used current technology and decoding programmes to decipher a clue that led them to more information on the suspect.

Students worked together to use the clues they found to eliminate suspects leaving them with the final information to calculate the perpetrator of the crime.

Carl Swendell, Head of Year 10 at Nobel summarised the event in the Nobel Newsletter: “This past week, we were fortunate enough to take a group of year 10 students to the North Herts College campus to engage in a crime scene investigation day.

The stage was set as we arrived with a physical car crash on the front of the premises, it was police taped and protected, ready for the students to investigate. Numerous suspicious items were collected from the ‘wreck’ with the assistance of the college team and we had our evidence.”

Speaking on the student’s overall experience Carl continues: “It was a pleasure to watch our Nobelians behave impeccably, develop some new skills with incredible equipment and fine-tune some of their academic skills for use in a real-life working scenario. We will definitely access this again.” 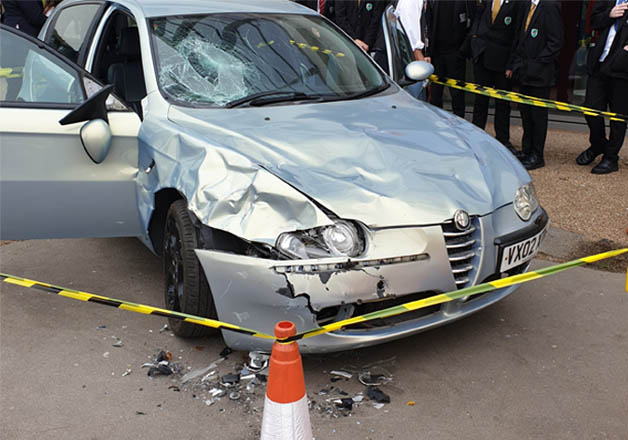