In light of the passing of Her Majesty Queen Elizabeth II, the North Hertfordshire College community have been reflecting on the monarch’s reign and her involvement in the local area.

Back in March 2003, Queen Elizabeth II officially opened NHC’s Stevenage Campus alongside the Duke of Edinburgh. The Queen met with students and staff as she toured the then newly opened computer centre before unveiling a plaque to officially open the building. This was a first for Further Education – not only was the Queen opening the building, but she also had lunch in the Community Hall.

The visit truly brought the College community together. Catering students designed the menu and prepared the three-course meal for the royal visit, whilst Public Services students worked closely with the police and the College security team to assist with parking and pedestrians. 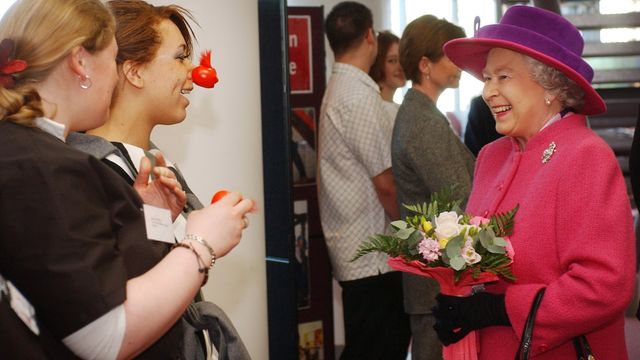 ‘A day they will remember for the rest of her lives’ – Roger Gochin, former Principal of NHC

“There are two things I remember most. Firstly, the Queen and Prince Philip were brilliant. They were interested, engaging, amusing and great company for over two hours they spent at the College. They put everyone at their ease.

“Secondly, the staff and students worked so hard to get ready for the visit so that the day went like clockwork. Everyone was excited but they participated fully with the Queen and Prince Philip, making it a day they will remember for the rest of their lives”

“The day Her Majesty visited Stevenage was very exciting for everyone at NHC. The weeks of pre-planning and discussions about security were less exciting but very worthwhile! I recall the disbelief amongst staff when they were told the news of such a prestigious visit!

“The Queen and the Duke of Edinburgh were wonderful, they seemed genuinely interested in our activities and the local area. I was privileged to meet The Duke for a workshop with our students, he was very genuine and had moments where he displayed his famous sense of humour!

“Then together they officially opened our College & the Queen chatted with her subjects. Wonderful memories.”

‘I was so nervous, I winked at her!’ – Karl Scott, Course Team Leader

“I remember meeting Prince Philip in front of the lifts. Carol Ashby (who was HR Manager at the time) and I were wearing sashes as we were guides for the visit. Prince Phillip said to Carol: ‘Who are you? Miss Stevenage?’, and Carol replied: ‘No, I’m Miss Guided!’

“When it was my turn to meet the Queen, I had my speech memorised to tell her about Learning Resources. Unfortunately, Roger Gochin (who was Principal) stole all of my boss’s lines, which meant that my boss, Sally, said my lines… all I was left with was ‘Good afternoon, Your Majesty, can I introduce you to Matthew Rowntree?’. I was so nervous, I also winked at her! She did offer her hand for me to take, though, which is good.”

‘An honour for all NHC staff’ – Heather Almond, Head of Marketing & Communications

“I remember waiting outside the building for the Queen and Prince Philip to arrive. There were quite a few staff members outside, and we all had our flags to wave as the cars pulled up. The memory that stuck with me the most is the level of security the visit entailed. We were able to follow the Queen’s car journey via the helicopter that hovered overhead the whole drive down the A1(M) and into the College. It was such an honour for all NHC staff to welcome her to our college.”

“I wasn’t working at the Stevenage campus at the time but I recall that in the lead up to the big day, a Performing Arts tutor was offering curtseying lessons to female members of staff!”

“I was very fortunate to be part of the planning team when Her Majesty the Queen and Prince Philip visited Stevenage to open the new college site in 2014. I remember how exciting it was on the day – we arrived at about 5 in the morning and watched with fascination as the airport-style security was installed by the main entrance and guests started to arrive. There was such a buzz as we’d been practising our curtseys and formal greetings for weeks. Many of us had never met anyone from the Royal Family so we didn’t really know what to expect.

“One lasting memory is when I was accompanying a guest with mobility challenges down from the first floor after lunch, and we needed to use the lift. As the lift started to move, the crowd in the atrium roared with cheers and applause – not realising it was only me with our guest! Shortly after, the lift descended and this time it was The Queen and Prince Phillip, preparing to make their departure from the College. It was such a memorable and special day – I still have the video.”

“I remember that during the Queen’s visit, we were not allowed to be seen moving around the building when the royal party were going round. Consequently, every time they went into a room for any length of time, we all had a mad dash to get to our next allocated location. We also had to be really quiet when we did so. Lots of people were magically springing up in different places!”

‘I brought my son along’ – Rachel Williams, MI & Exams Coordinator

“I remember bringing my son along for the visit. I was given special permission from his school to take him to the College for the day to meet the Queen. We stood outside and waited for the royal arrival, waving our flags!”

“We were all very excited about the Queen and Prince Philip’s visit, it was a huge privilege for our Catering students to be able to cook and serve a meal for them. The food was delicious, too. I was warned to eat as quickly as possible because as soon as the Queen finished her meal, the rest of us would need to be finished too – her equerry told me he rarely got to enjoy dessert. One minor faux pas was when a student served the Chair of Governors first, which was hopefully overlooked!”

‘A buzz of excitement and a wonderful atmosphere’ – Jenny Woolnough, ALS Coordinator

“I was one of the lucky ones who met and shook hands with the queen.  I can remember we had to arrive at work very early in the morning to pass through stringent security checks, including bag checks and body scans.  There was such a buzz of excitement with a wonderful atmosphere.  We practised our curtsy previously as were worried that we would get it wrong.  The moment she came to meet the line of people I was standing with was magical and also nerve-wracking. The queen asked a question to my group; Debbie Richardson, Becky Croucher and myself, Becky and myself were so overwhelmed we couldn’t speak! Fortunately, Debbie managed a response; unfortunately, I can’t remember what she asked us. She shook our hands, we curtsied and the queen moved on to the next group of people.  Amazing experience.”

“Prior to the visit, Her Majesty has specifically requested to meet students with learning difficulties so I met her in S007 (computer room) chatted to her and introduced her to a number of students who were working on PCs. She was shown around the building by the then Chair of Governors who introduced me to the Queen.

“My main memories were of being instructed to only shake her hand after she’d proffered her gloved hand (which she did) and her genuine interest in the students. I reckon I spent about 5 minutes with her before she moved on. The Queen was very chatty, charming, an active listener, so engaging and smiled a lot! She was also much smaller than I’d expected her to be.”