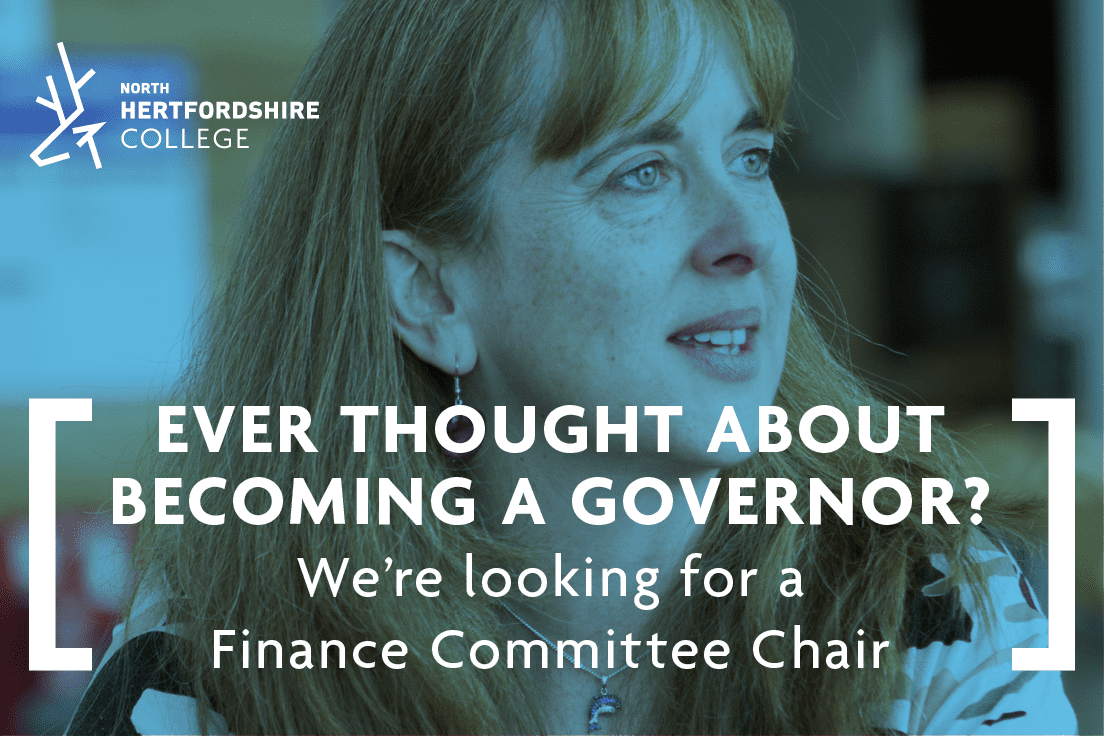 Have you ever thought about becoming a governor?

Our governors play a vital role in the success of the Hart Learning Group (HLG), proving a wealth of experience from across different social and professional backgrounds to ensure the group is well-run and high-achieving. We’re currently looking to build our Governance team – could you be part of the future of HLG?

Until retirement at the end of 2016, Andrew was Deputy Director, Services for Children & Young People, within Children’s Services at Hertfordshire County Council. He led the county’s 14–19 Strategic Learning Partnership and was responsible for commissioning its 16–19 learning provision.

Before taking up a role at the county council in April 2008, Andrew was Chief Executive of Connexions Hertfordshire and had worked for 26 years in various strategic and management roles with DCSF (DfE) and its predecessor government departments.

Andrew was awarded an OBE for services to young people in the 2007 New Year Honours List.

Prior to her retirement in September 2019, Toni was the Director of Quality and Learner Experience at Barnet and Southgate College. In this role, she led on the college’s quality processes and procedures and also managed a range of support services for students.

Toni has over 34 years of working in the further education sector and has held a variety of roles relating to curriculum delivery and support. She has a particular interest in students with learning difficulties and disabilities and began her career in the sector working as a course tutor on a supported learning programme.

Toni is passionate about the further education sector and the vital role it plays in changing people’s lives.

Kit Davies was appointed CEO of Hart Learning Group in April 2018, having undertaken the role on an acting basis from December 2017. He joined the Group in August 2015 as Deputy Principal of NHC and was promoted to Principal in September 2017.

Kit began his FE career in 2001, having previously lived and worked in Spain, Mexico and Japan teaching and training English language teachers. Kit is a fully qualified teacher, teacher-trainer and language specialist with a broad set of classroom practitioner and management skills gained from over 20 years’ experience in a range of educational settings.

His academic background is in the field of linguistics, having completed a degree in Spanish at Portsmouth University and then a master’s degree in Applied Linguistics at King’s College London. He has one published book to his name, a secondary school book on Spanish language and culture called ‘Spain Live’.

Lynne holds a BSc in Environmental Science and Geography. Until earlier this year, she was Technical Director of BSRIA, a test, instruments, research and consultancy organisation in the construction and building services providing specialist support services for design, construction, facilities management, product testing and market intelligence.

She previously held an international role with Parsons Brinckerhoff (a global professional services company). She is a member of the professional association in environmental management systems.

Lynne’s particular expertise lie in sustainability, resilience and future planning in the built environment. Her passion for equipping the next generation with skills and knowledge for the challenges of the future motivated her to volunteer for the Governing Body at NHC.

Vernon spent his career in university management at the University of London and retired as Academic Registrar of Imperial College in 2008.

Vernon was also chair of governors of St Christopher School, Letchworth Garden City until December 2013, and he held posts on the Board of Trustees of Queen Mary University of London Students’ Union and the University of London Convocation Trust until July 2017. He has been an education consultant to Mills & Reeve, a national firm of solicitors, and was a director of Letchworth Sports & Tennis Club until 2020.

Liz Calver has worked for North Herts College since July 2014 and, as a lecturer and Head of Curriculum, has expertise and a strong track record in mentoring, coaching and supporting other staff.

As a Head of Curriculum, she works closely with staff teams and managers across the college and is pro-active in helping develop and implement the policies and strategies of the Hart Learning Group.

Liz is a scientist and has spent her career in developing new medicines within the pharmaceutical industry and currently works at GSK.

She has spent time in both research and development and has lead international drug development teams, working alongside national regulatory agencies and experts in medical practice. Liz has expertise and a keen interest in both organisational and personal development change leading to continuous improvement. Working with teams and individuals to be the best they can be motivated her to become involved with the North Herts College.

Philip has enjoyed an over 35-year international career in financial services and is now plural.

He is a Trustee of The Royal British Legion and chairs its Finance Committee. He is also a non-executive director (NED) at Bank of Ireland (UK) plc and Chair of the Audit and Risk Committee of Codan A/S, Scandinavia’s third largest P&C insurer. He served as a Governor of Aylward Academy between 2011 and 2019. Until 2017 he was Group Finance Director of LV=. Other previous roles have included a Partner at PwC based in London and then Hong Kong. Philip is married with two daughters both of whom are in full time education.

A qualified accountant, with a particular focus on forensic accountancy, David is an accomplished senior executive with 20 years’ experience operating at board level in a variety of roles within several complex organisations.

Having excellent communication, influencing and change management skills, he has a track record of leading businesses through critical transformational change programmes.
He has experience in acting as an expert witness, presenting complex issues and evidence in a way that makes them easy to understand, and has undertaken a risk assessment of business strategies for major clients.

Geoff has substantial experience of delivering private sector levels of efficiency and value for money while also delivering public sector accountability and maintaining probity, assurance and governance. As an experienced non-executive, Geoff has a close association with delivering financial rigour, turnaround strategies for business development, while retaining a clear focus on Risk Management and Governance.

He has recently completed a term of ten years as Audit Chair for another FE College and has served in the same capacity for a local Primary Care Trust. He has a long-standing commitment to a range of charity work, including working as a volunteer with Medical Detection Dogs.

Dr Kate Barclay has a portfolio career working across high impact Science and Technology talent programmes including Skills Strategy Consultant with the BIA, Higher Education Institutions, Cell and Gene Therapy and High Value Manufacturing Catapults. As a Chartered Chemical Engineer and Fellow of the IChemE, she has spent over 25 years in the Bio-Pharmaceutical Industry as a Senior Leader in Global R&D leading scientific project teams in commercial and clinical manufacture of parenteral, solid dose and novel device technologies.

Kate has been a Board member of the Institute for Apprenticeships and Technical Education (IfATE) since inception with specific responsibilities for policy and quality assurance.

Outside of work Kate volunteers as an Enterprise Advisory with Careers and Enterprise Company supporting local secondary schools in navigating post-16 education pathways, is a member of the Governing Body of North Hertfordshire Further Education College and active science industry ambassador on Hertfordshire Skills and Employment Board.